Match Made In Wonderland 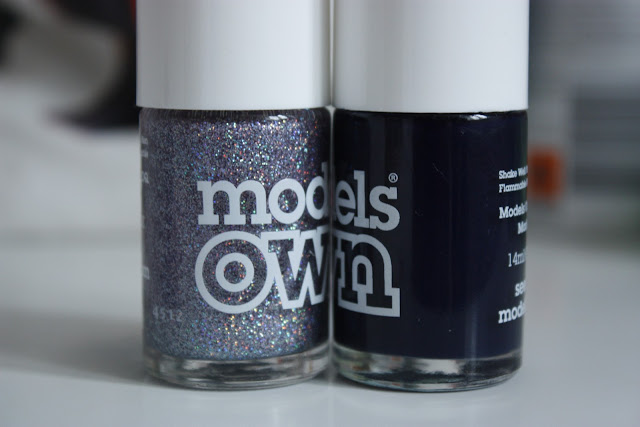 Southern Lights and In The Navy by Models Own.

I really wanted a new glitter nail polish, so I headed down to Boots and went straight to the Models Own section, as I love their polishes! They are easy to apply and the colours are always exciting and different, I've used the Disco Mix shade previously and I've nearly ran out, which is a shame because I love the mix of purple and blue glitter. However whilst pondering weather to go for a similar glitter shade, I saw the 'Southern Lights', from the Wonderland collection; which is based on the colours of winter and contain four other polishes. I instantly knew I wanted it, it was the perfect wintry colours and looked amazing in the bottle.
Southern Lights is gorgeous, a beautiful mix of lilac and silver glitter that shines and sparkles in nearly every colour, from red to green to yellow. It is £5 on the Models Own website, but Boots usually have a deal on their nail varnishes that makes them a little bit cheaper.
I decided to go for a navy shade for the base coat, this one is called 'In The Navy' as I thought it would go nicely with the lilac undertones of the glitter.This combination works so well, as the navy creates a nice dark background, without being as harsh as black undercoat would be but is still dark enough to set the dazzling glitter off!


I also love the navy on it's own, it needs at least two coats to bring out the full colour of the polish, however it looks so gorgeous. I really love Models Own nail polishes as they are so easy to apply and stay on for quite a while, as long as you add a clear coat on top of course!
Has anyone tried any of the other colours from the Wonderland collection? I would love to know which ones are the ones to go for next!
x
Posted by Unknown at Thursday, January 03, 2013