So after a week full of sun, food and cocktails I'm back to reality, which in fact isn't too bad seeing as it's pretty hot here anyway.
If you didn't already know I was in Tenerife along with my boyfriend and my sister. It was a really great week from going to the zoo; where someone surfed on a dolphin, which was pretty mind blowing to eating amazing food and seeing the sunshine every morning from our balcony. So here's a few snaps from last week... 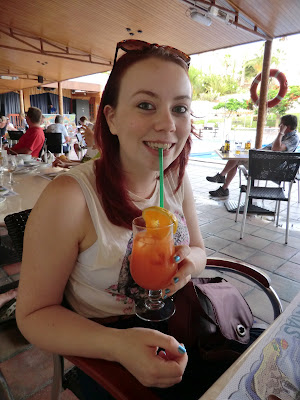 Me enjoying a tequila sunrise, on our first evening. It tasted so good! Later on in the week I came to realise that Spain don't have measures of  alcohol, so add as much as they feel like. Seeing as I ordered a southern comfort and lemonade, which was half full of southern comfort! 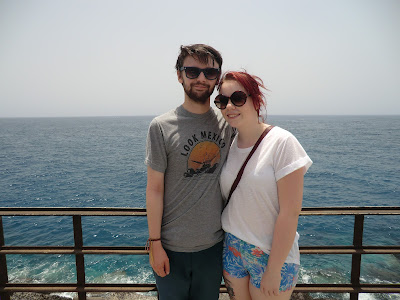 Craig and I at Los Cristianos, really busy town and such a hot day!! But beautiful views of the sea and beach. 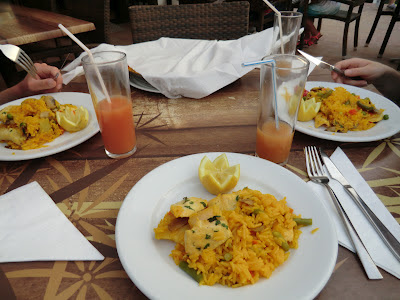 Chicken and vegetable paella, which was amazing. We found a steak house in the area we were staying in and decided to have go for local cuisine. It was delicious, definitely worth the money and it was huge! Going to learn how to cook it because it was just so yummy. 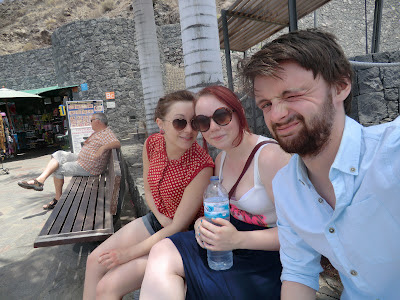 We climbed to the top of Los Gigantes, took about an hour and the views were beautiful! Worth walking up there to see how amazing it looked. We thought there was a restaurant at the top that my auntie had told us about, however after finding that the restaurant at the top wasn't 'The chicken shack' we asked her and she said we couldn't find it because it was in Playa De Las Americas.
Alas we never found it/got to Playa. 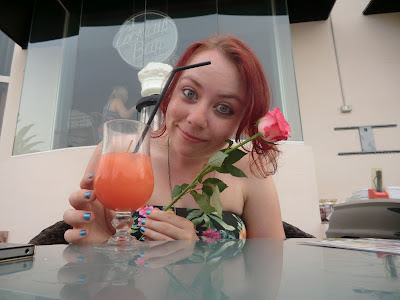 However we did find an amazing 50's american diner called 'Harley's! Who could resist cars you could sit in and have a meal in and yummy food and cocktails. (Also a rose Craig bought for €1, from a random man walking around the tables, it was definitely nearly dead but still a rose!) 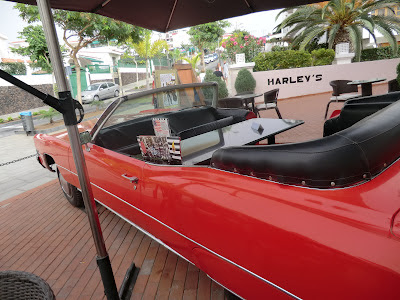 One of the cars you could sit in, unfortunately is was reserved so we had to sit on the normal seats next to it.
All in all I had a great holiday and even managed to get a little tan, which is difficult seeing as I have very fair skin and usually burn.
I recommend going to Tenerife, as it is so sunny, has places with great views, and everywhere is a bus ride away (depends where you stay).
So glad to be home though, sleeping in my own bed was a highlight!
I now also get to blog again, and will show you a few of the outfits I wore during the holiday in the next few days.
Has anyone else been on holiday lately or are you just enjoying the sunshine (finally) in England?
x
Posted by Unknown at Tuesday, July 24, 2012